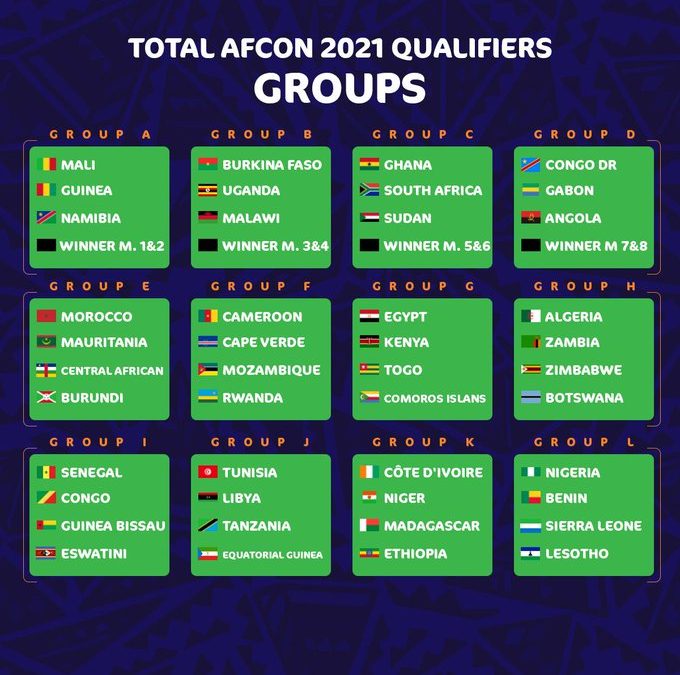 The draw for Afcon 2021 qualifiers was made in Cairo on Thursday with the host nation, Cameroon, included.

This year’s finalists, Algeria and Senegal have been pitted in Group H and I, respectively.

The Warriors are in Group H with Algeria, Zambia, and Botswana.

Senegal will slug it out with Congo, Guinea Bissau, and Swaziland.

The 33rd edition of the showpiece is billed to take place in Cameroon in the summer of 2021.

The 48 nations, including hosts Cameroon, have been split into 12 groups consisting of four teams, with two teams from each group progressing to the finals.

While the Indomitable Lions are guaranteed a place in the biennial competition, they will feature in the qualifiers and have been drawn in Group F alongside Cape Verde, Mozambique, and Rwanda.

Egypt, hosts of the 2019 showpiece and eight-time champions, were drawn in Group G and will slug it out with Kenya, Togo, and Comoros.

Group C is headlined by Ghana and South Africa, with the pair set to compete with Sudan and one of Mauritius and Sao Tome and Principe.

After disappointing as tournament favourites in Egypt, Morocco will pick themselves up for the qualifiers as they battle Mauritania, Central African Republic and Burundi in Group E.

Groups J and K are headlined by Tunisia and Ivory Coast. The Eagles of Carthage will have to navigate ties against Libya, Tanzania, and Equatorial Guinea, while the Elephants will play Niger, Ethiopia and Madagascar – who impressed in their first outing at the showpiece in Egypt.

Mali, Burkina Faso, and DR Congo are the top seeds in Groups A, B and D respectively. The trio will encounter Guinea, Uganda, and Gabon in their quest to make the final 24 teams at the finals.

Preliminary Round:
Liberia vs Chad
South Sudan vs Seychelles
Mauritius vs Sao Tome and Principe
Djibouti vs Gambia

Group A: Mali, Guinea, Namibia and the winner between Liberia and Chad.

Group B: Burkina Faso, Uganda, Malawi, and the winner between South Sudan and Seychelles.

Group D: DR Congo, Angola, Gabon and the winner between the Gambia and Djibouti.